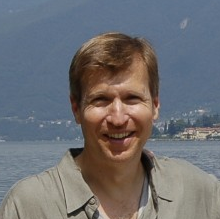 Jay Trimble is in the Intelligent Systems Division at NASA Ames Research Center where he is the mission operations and ground data system manager for the Resource Prospector Lunar Rover Mission. Prior to this Jay founded and led the User Centered Technology Group, which developed Open Mission Control Technologies, an open source mission operations display technology, as well as the MERBoard Touchscreen for Mars Rover Operations and Planetary Data System User Technologies.

At the UC Berkeley Space Science Lab Jay was the Integration and Test Manager for the High Energy Solar Spectroscopic Imager.

At the Jet Propulsion Laboratory Jay was the Lead Operations Director for Space Radar Lab 1, and was on the science operations support team for the Voyager encounter with Neptune.

At Johnson Space Center Jay was a Shuttle Mission Controller in the Payloads Discipline.

I will present my teams experience in going from traditional development to agile user centered development using participatory design methods with my group at NASA Ames Research Center. We reduced our delivery cycle from six months to three-weeks, we increased product quality, decreased cost and increased the engagement and enjoyment of our own team and the customer. I'll present the key principles and lessons learned, the role of the customer, the users and our own team of developers and designers.